In Hot Water over (lack of) Hot Water

At KC Airport’s Marriott, it’s Digital Mixing to the Rescue 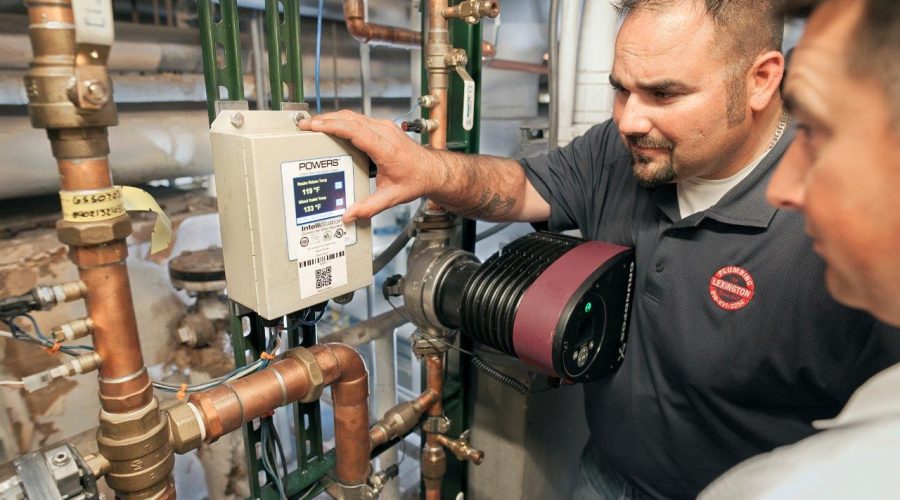 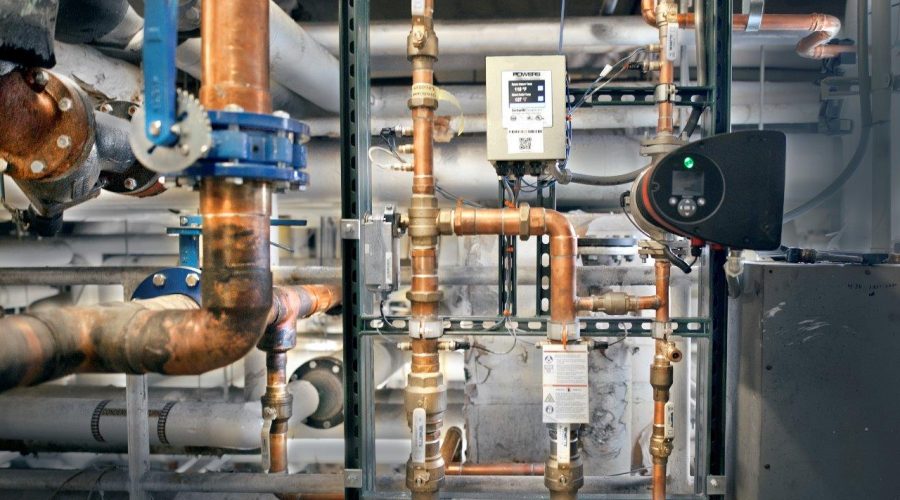 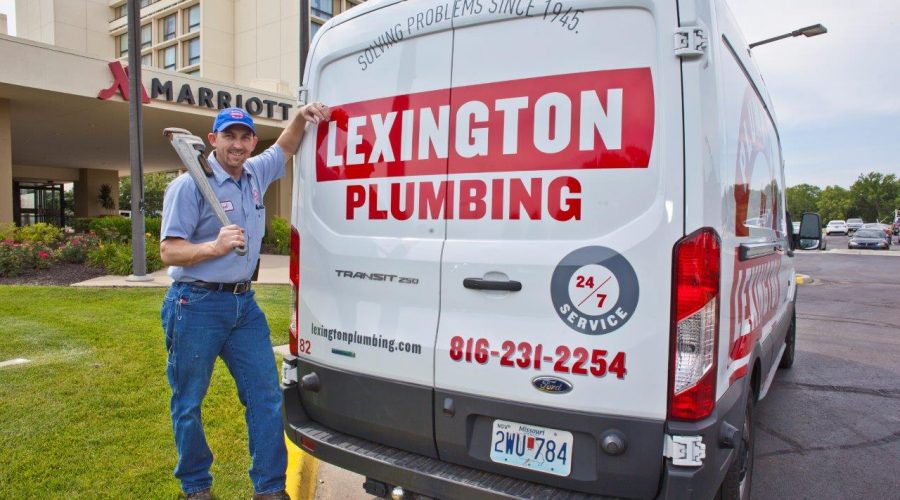 Most hotel managers have learned through experience that their toughest, crankiest customer is an unhappy guest at 5 am, or midnight.

They’ve either just woken up and have to move out post-haste, or, after a long day of travel, they need to turn in immediately.  But the “hatchet’s in hand” if there’s insufficient pressure – or hot water – for a shower.

Irate hotel guests, at the oddest hours, are known to make quite a ruckus if a hotel’s worst case scenario coincides with a stressed-out business traveler.  “It’s a situation we work very hard to avoid,” admitted Greg Brinkerhoff, director of engineering at the Kansas City Airport Marriott.

According to Brinkerhoff, late arrivers and early risers can push the limits of a hotel’s hot water heaters and plumbing systems.  At his 384-room hotel, adjacent to a busy airport, there’s a steady flow of guests at all hours.

“The highest demand for hot water comes between five and six AM and again between ten PM and midnight,” added Brinkerhoff.  It wasn’t uncommon for hotel managers to get several calls a week from guests, irate about the lack of hot water.

“Unfortunately,” said Brinkerhoff, “The best we could tell them was that hot water ‘was on its way’.”

For more than two years, the hotel battled domestic hot water issues.  As it turns out, a large hydronic valve was used for the original system.  The misapplied valve had a 120-second response time and couldn’t actuate quickly to keep up with the changing water pressures present within the hotel.

Because of the valve’s sluggish response time, every time something would go wrong with the pumps, heat exchangers or storage tanks, the entire domestic hot water system would require a time-consuming recalibration.  Maintenance was required routinely – a constant source of disruption for the engineering staff.

“More or less, when maintaining the domestic water system, we had to isolate the entire piped network, shutting it down completely,” continued Brinkerhoff.  “Whenever the hot water mixing valve opened or modulated, the entire system would flood with cold water.

Instead of being able to run the hot water storage tanks at 150°F, facility engineers had to turn the tanks down to produce storage temperatures of only 125°F – insufficient for cooking and cleaning.  Also, online slots usa the capacity of hot water storage plummeted.

Brinkerhoff was appointed to act as liaison between hotel ownership and the installing contractor.  Having worked with him in the past, Brinkerhoff called on Ian Walters, project manager for Kansas City, MO-based Lexington Plumbing, a mechanical contracting firm specializing in commercial and industrial work.

Walters had a solution in mind shortly after speaking with Brinkerhoff about the hotel’s DHW issues.

“Ian and I had this discussion about the hotel’s domestic water system, and that there are just so many dynamic changes with the pumps and water pressures,” said Brinkerhoff.   “We knew that what the hotel needed was a smarter, more responsive valve – especially considering that the guests in all of our 384 rooms had very different schedules.”

Months earlier, Walters had learned about a digital mixing valve made by Powers, a Watts brand.

“They make a smart delivery solution for mixing domestic water in a hot water recirculation loop,” explained Walters.  “It’s called IntelliStation.  Shortly after learning about them from our rep, we installed one at large hotel on the other side of town.  There, we exceeded the expectations of facility managers – a strong confirmation that the technology worked well.”

But Walters didn’t want Brinkerhoff to just take his word for it.  He wanted to show him first-hand.

“I went with Walters to another Marriott hotel that had had similar hot water issues,” Brinkerhoff said.  “They’d installed an IntelliStation digital mixing system there, and I was able to see it in operation and speak to facility managers who more than vouched for the system.”

What he learned was that the hotel, which had experienced similar hot water issues, now had a fast-responding, safe and clean domestic hot water system that delivered hot water on demand.

“After hearing maintenance managers validate the technology – testifying that it only took seconds for hot water to get to taps – I was sold,” added Brinkerhoff. 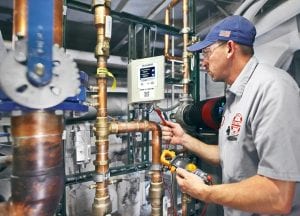 Hotel guests at the KC airport Marriott who get hot water fast today will likely never know that their comfort and convenience stems from a digital mixing valve presentation given just a few months earlier by Jamey Shibel, CFO and partner for manufacturer’s rep firm, Mack McLain & Associates, headquartered in Olathe, KS.

“We presented the IntelliStation’s capabilities at Lexington Plumbing,” explained Shibel.  “Very shortly after that, we were writing up an order for one to serve as the focal point for a domestic water retrofit at another Marriott hotel in Kansas City – the one that Ian Walters took Greg Brinkerhoff to before work began at the airport hotel.  It was the success of that installation that led to the opportunity with Greg.”

According to Shibel, sizing and specifying a digital mixing station is relatively simple, with key parameters that include overall GPM, load of the building, pipe sizes, height of the structure, number of rooms, and fixtures, and size of utilities such as the laundry and kitchen facilities.

Designers of large plumbing systems are now discovering that a digital mixing system is the most effective way to deliver properly mixed water throughout a hot water recirculation loop.

Digital water mixing represents a significant leap in the technology used to control hot water delivery. The approach incorporates a programmable valve or system to quickly process temperature, flow, and pressure data, which is obtained from the hot and cold water inlets, mixed outlet, and sensors on the mixed-water return. High-speed, responsive electronic actuation modulates a simple valve that allows the setpoint to be electronically controlled and maintained.

Digital mixing allows engineers or facility managers to select a desired hot water temperature and to control and monitor the entire water distribution system. For even greater control, these systems can be installed as part of an ASSE-compliant water distribution system, including point-of-use mixing valves at each fixture in the plumbing system.  This ensures that hot water storage temperatures can be kept at levels lethal to pathogens, then mixed to safer temperature levels both at points of distribution, and use.

Other key advantages to digital mixing include:

Most systems are also field-configurable without the need for a laptop or special software. Digital water mixing and recirculation can easily be integrated into a building automation system (BAS) to allow facility managers to remotely monitor and control water temperatures.

Since the installation of digital mixing technology at the hotel, facility managers have yet to receive a hot water complaint – with hot water arriving at taps and showers quickly and at a safe, consistent temperature.

Rather than experiencing the constant headache of boiler room problems and system troubleshooting, Brinkerhoff and his staff merely schedule routine maintenance checks on a six-month cycle.

Varying pressures and temperature fluctuations throughout the hotel’s hot water system no longer pose a threat; they’re managed with ease.  While 125°F water is sent to guest rooms in an instant, a second hot water loop now runs 150°F water to the kitchen and laundry areas where higher temperatures are needed for cooking and cleaning.  And, water is safely generated and stored at a germ-scorching 175°F.

“And when guests are happy, building owners are happy,” he added.  “There are no mixed emotions or opinion on this investment.”

According to the Centers for Disease Control, proper maintenance of water distribution systems is key to preventing illness from water-borne bacteria such as Legionella. CDC statistics show that 8,000 to 18,000 people are hospitalized with Legionnaires’ disease in the U.S. each year. Managers of commercial and institutional facilities know that selecting and controlling proper water temperature in their storage and delivery systems plays an important part in preventing germ growth.

The thermal shock of a rapid and uncomfortable change in shower water temperature can cause a fall or serious injury. With digital mixing, stable mixed water is delivered to ASSE-listed thermostatic point-of-use devices (shower or sink valves) to minimize this risk.

IntelliStation: all about digital mixing

The Powers IntelliStation touchscreen control operates a three-way valve through a high-speed actuator to precisely maintain the selected outlet temperature. Temperature and pressure sensors are included at key points within the panel to enable an immediate response to changes in fixture demand and supply water conditions. A built-in pump (optional) provides recirculation of the tempered water loop. This reduces the wait time at point-of-use fixtures and conserves water.

A Sanitization Mode allows buildings with a thermal eradication protocol in place to control water-borne bacteria to deliver a higher water temperature for a pre-set duration to allow building maintenance staff sufficient time to open all of the fixtures. IntelliStation can be connected to a building automation system (BAS) to provide read access to a range of temperature and pressure measurements and allow adjustment of the outlet temperature setting within a pre-programmed range. BACnet® IP, BACnet® MSTP and Modbus® protocols are all supported.